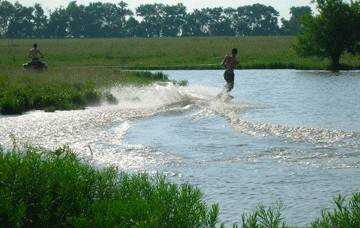 There ain't nothing funnier than watching normal people do incredibly insane things. Two young men I know quite well recently called me and said they were going to go wakeboarding. Cool, thought I! I like to wakeboard eventhough I'm incredibly horrible at doing anything but standing up and following the boat. When I wreck...it's a sight to be seen. I've wrecked so badly that after a few weeks of the worst sinus headaches I've ever had I went to the doctor, who told me that I had an infection. Most likely from repeated head slams into the lake at 40mph ... which result in the rush of water through every hole in the body, including the nose. It really is worse than it sounds.

Anyway, to keep you all entertained, here is a crazy soccer stunt by my boy Freddy Adu. That's right...my boy. We are tight. I know his name. . . but he doesn't know mine. Anyway, it's amazing.

Up next, fun times with snow. It's up there with the best wipeouts of all time.

How did those July 4 fireworks photos turn out?