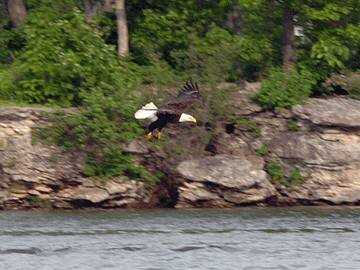 Ever have that feeling that you should do something ... no reason at all ... just this feeling is pulling on you to tell you to go or do something? I do occasionally. Wednesday that happened for me. As I departed the studio around 5 p.m. I thought of going home and popping in a movie I had rented. The Hitcher. Some scream flick that begged to be watched. But as I got outside Fort Scott I decided to head to Girard rather than home toward Pittsburg.

This direction would take me to Lake Farlington ... I had a fleeting thought that I just might get lucky and find a bald eagle to photograph. For those of you who aren't aware, I'm a freak about photographing bald eagles. I was an Eagle at Uniontown High School and that has rubbed off somehow and given me this freakish desire to see them and photograph them. Anyway, I got to the lake around 5:47 p.m. and drove to the spillway to see if it was passable due to high water. It wasn't. So I proceeded across anyway just to see what it felt like to have water push my vehicle. Stupid? Yes. Fun? Absolutely ... at least it was since I didn't get catapulted over the edge of the dam and die. I'm not too keen on that sort of death. Anyway (again), I made my trip around the lake and saw nothing. No sign of an eagle ... not that there are any signs ... but as I rounded the final turn and decided to go home I had that FEELING that told me to make one more pass.

I turned toward the big tree that I was told eagles generally chill out in and there it was. Massive. Biggest eagle I've ever seen. Stunneriffic. Magnormous. And then I unloaded about 50 megabytes of digital madness on the bird just as it sat in its tree. At this point I was three football fields away. But I needed that proof to show my wife since she has accompanied me on that very same trip before (with bad results). I made my way closer (about 50 yards) and sat down to watch. Shortly thereafter my new friend took off. I thought my chance of landing a cool picture were gone.

But then it swooped down and swiped an unsuspecting fish from the water, and yes, I got a photo but nothing great. And then it flew off into the sunset.

I wish I was an eagle.