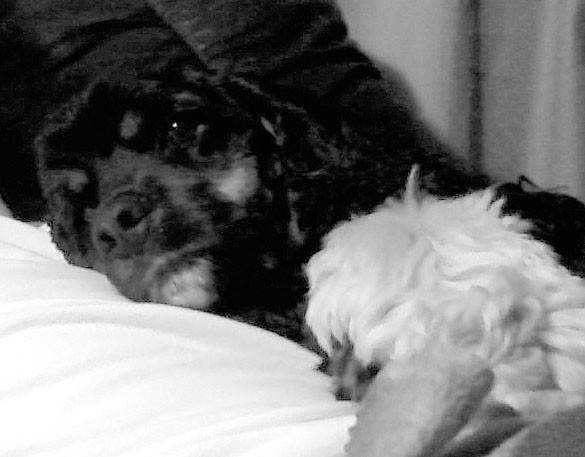 I'm a bit bamboozled as of late. There for a period of about 2 weeks I was cranking out blogs like there was no tomorrow. Almost like I had things to say before the clock could tell me another hour had passed. But this past week I'm straining for words so that I might be able to enlighten the masses, inspire my blog community.

Wife and I recently welcomed a new addition to our family. Her name is Shelby and she's a German Shepherd/Keeshon mix. That's right, a dog. Not a kid. She's living right now on a 40-foot cable. We would let her run but she hates the horses and likes to bark at them. I'm afraid she might go after them and end up getting kicked across the pasture if we let her roam free. The one problem she has had so far, though, is getting her chain caught on EVERY single stick, blade of grass and fleck of dirt in her little yard area. I think we finally solved that problem.

Though she lives outside, Shelby has grown up the last 12 years a fairly spoiled dog. Her spoiledness doesn't even compare to my other dog, Mocha Frappuccino Felt (named after my favorite Starbucks beverage).

Mocha is a cocker spaniel. Sometimes I wonder if she really is a human...she sleeps in our bed, MUST eat at the same time every day, grunts at us when she's mad and burps in my face after she eats. She has a coat for when it's cold out. Hand-crafted ceramic bowls. And just like a child when they absolutely MUST have your attention, she sits between us and the television so we have an obstructed view. Ane when we watch the T.V. at night, she sometimes crawls up in the recliner and nestles herself like a toddler in my armpit (please see photo above). It's quite pathetic on my part but I get a kick out of it. She's as close to a kid as I'm currently ready to have.

Fellow online bloggertte Layne Felt is not my wife. I've actually no idea who she is. Maybe someday our paths will cross. There's also the chance she is my long, lost sister. I have a horrible memory. So...Layne...if we are related...I apologize for that fact.

Don't wait too long to get your senior photos booked here at Captured Images (620.223.5375). Gary Palmer is by far the best portrait photographer in the area. He will blow your socks off ... he's THAT good. Literally, your socks might actually be blown off your feet. Don't let that deter you from coming in. We are booking up already for 2008 seniors...so get your holler on and call us.