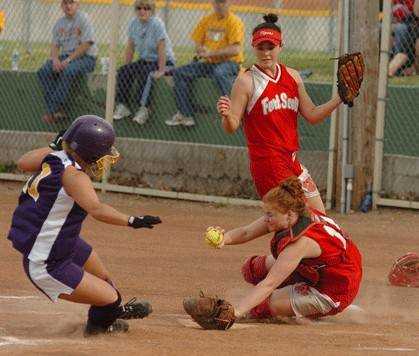 Pooeyness - This word can't be found in Webster's Unabridged Dictionary. But it can be found in the dugout during a Fort Scott High School Tigers softball game. Actually, it was introduced to me by one of my good pals when she said I lacked the heart she thought I should have. She then used "Pooeyness" to describe me. Shocking.

See, last year at this time I was being introduced to the game of high school softball and the personalities that the Tiger team is made up of. It was an atmosphere that drew me in and consumed my evenings. I traveled to away games frequently, even to the state tourney in Salina. It was pretty much my life. And I can't say that I would have rather done anything else. I'd like to tell you that it was because of my stunning good looks, positive attitude and decent camera work that the team made a repeat trip to state. They will probably tell you that they would have finished as state champion had I not held a "party" outside my hotel room before the big game. So blame it on me!

Before this season, I promised the team I would be back in the dugout at as many games as possible to support my adopted team. I'm a Uniontown Eagle by birth, but sometimes I find myself torn between the two schools.

I was told that I was full of "Pooeyness" last night because I have missed a handful of games this season. She said I lacked the dedication and that she was crying in her heart.

I don't deal well with puppy dog eyes or someone making me feel guilty. I don't know why.

Anyway, enough chit chat. Catcher Amanda Metcalf (you can see her in the picture with this blog) deserves a shout out. She's a freak stud of a catcher. Scared of nothing except NOT getting to hit someone. It seems as if she would rather cement an opposing player in the ground than anything else the world offers. In the photo Metcalf can be seen bracing for a big hit that would soon come from a Coffeyville player. She got hit. But she held on to the ball and made the out. Last season she bowled over a first baseman who got in her way. Literally thought she killed her. Made a great photo of her staring at the girl as she lay in the dirt gasping for breath. She won't step in front of her again.

What's the point to this blog? Ummm...go see the Tigers play softball....? Or....thanks to my good pal who pointed out that I can do better. Or maybe there is no point....