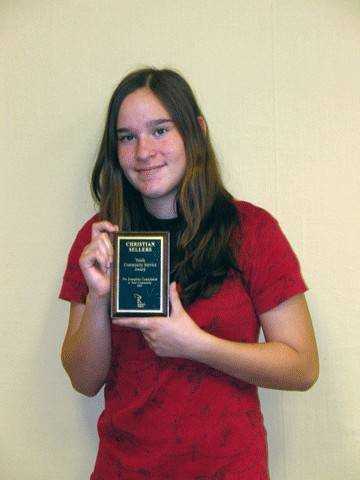 Sellers was awarded the Kansas PRIDE Youth Community Service Award during an awards luncheon at the Kansas PRIDE Day 2007 in Junction City on Sept 29. The award was given based on the PRIDE Projects that Sellers completed during her eighth grade.

According to Fort Scott Middle School PRIDE sponsor Joyce Davenport, Sellers was nominated for her award for various reasons.

"Christian was nominated for the award because of her great involvement in the PRIDE program participating in almost all of the 35 projects they did this past year. She has participated in projects such as providing childcare for groups, working with the elderly at nursing homes, and participating in fundraisers for important community needs. She has also worked in many community events such as volunteering at the Fort Scott Home and Garden Show and at the Fort Scott National Historic Site. She has promoted the Red Cross Bloodmobile by hanging posters around town and by working at it," Davenport said.

Davenport said that Sellers was nominated because of her year-round service in the Civil Air Patrol, a program which trains cadets for emergency services around the state. This program equips the cadets with leadership skills in addition to providing them with an aerospace education.

Sellers said that she takes part in the Civil Air Patrol because her grandfather and all of her siblings are involved in the program.

According to Davenport, in addition to Sellers' PRIDE work and her Civil Air Patrol involvement, she also volunteers each month for the commodity foods program at the Bourbon County Senior Citizens Center and in often an alter server at her church.

Sellers has high academic achievements in spite of a busy schedule, Davenport said.

"In addition to all of her volunteer activities, she achieves all A's on her grade card as well as working four paper routes," Davenport said.

Sellers said that she became involved with the PRIDE program partially because of encouragement from her mother, Jacqueline Sellers, and because the PRIDE functions can be fun.

When asked how she felt about her daughter's achievement, Jacqueline said that she is very proud of Christian as well as all of her children.

"I am very proud of my kids. They work hard and stay busy," Jacqueline said.

Jacqueline said that she thinks Sellers' many community service events have helped keep her grades up.

Sellers said that earning the award "is cool."

The PRIDE program is a statewide community development effort that is co-administered by the Kansas Department of Commerce along with Kansas State University Research and Extension.