Wanderlust, dreamer and yet still a realist.
Angelique McNaughton
I just graduated from the University of Kansas with degrees in English and Journalism: News and Information. I joined The Tribune staff on Feb. 13 as a general assignment reporter and haven't looked back since!
Recent posts
Archives 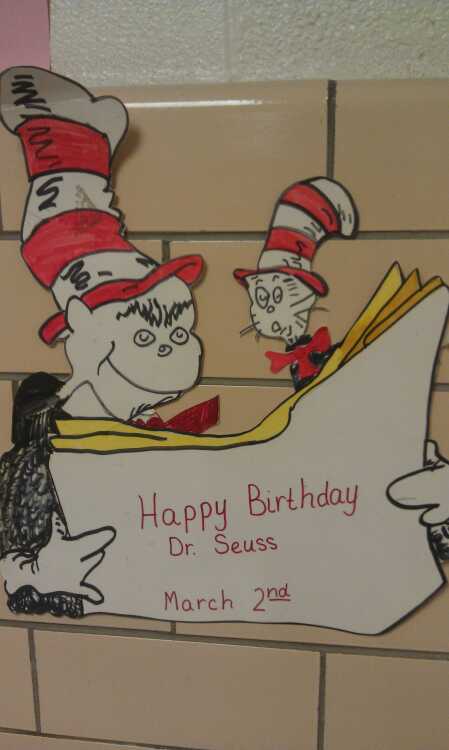 I don't know what the rest of you did today, but I celebrated reading with more than 400 students at Winfield Scott Elementary school.

It was an assignment for The Tribune but deep, down inside.... I really enjoyed it because it was about getting youngsters excited about words.

Today, March 2nd, marks the annual celebration of Read Across America day. To pay homage to one of my favorite activities, reading, and childhood authors, Dr. Seuss, I decided to provide some background on the literary genius and recall some of my favorite reads throughout the years.

In 1998, the National Education Association chose this day to celebrate literacy in honor of Dr. Suess.

For more than 50 years, the rhymes and talents of Theodor Seuss Geisel, or Dr. Seuss to most of us, have inspired waves of avid readers across the globe. Born in 1904, at the time of his death Dr. Seuss had written and illustrated more than 40 children's books. His children's masterpieces had been translated into more than 15 language and more than 200 million copies of his books have been sold world-wide. Some have even been transformed into television series and major motion-pictures.

Some of his more popular tales are: Green Eggs and Ham, Oh, the Places You'll Go, Fox in Socks, The Cat in the Hat, How the Grinch Stole Christmas, and Horton Hear's a Who!

My dad and older brother were always big readers and as far as I can tell, that's what inspired me.

One of my favorite,first books was Green Eggs and Ham.

If you will let me be,

I will try them.

I remember checking that book out from my elementary school library week after week. So the point is, I was hooked. I loved what reading was about because as a child, something that encourages you to use your imagination can't be beat.

My first big read was Hugh Lofting's The Story of Dr. Dolittle. What I remember as 300 pages was probably more like 150, but to an 8-year-old that was an accomplishment.

Other books I read throughout elementary school that I can remember were: Charlotte's Web, The B.F.G (Big Friendly Giant), and The Diary of Anne Frank.

I got into more serious topics in middle school and the one book that I read then that still really sticks out in my mind was called Billy. It was about a 10-year-old black boy in 1930s Mississippi who is executed for the accidental death of a white girl.

In high school I got into murder/mysteries reading whatever Barnes and Noble had in their section. I also was assigned some great reads in my classes such as The Jungle by Upton Sinclair, about the meat packing industry, The Hot Zone, about the ebola virus, and the autobiography of Malcom X.

My love of words and the images they could inspire in my mind led to my majoring in English at KU. There I was introduced to the "greats" and not-so-known authors of our time and times past. I read such classics as: the Catcher in the Rye, the Great Gatsby, The Odyssey and A Portrait of the Artist as a Young Man. I was exposed to authors like W.E.B. Du Bois, Langston Hughes, William Faulkner, Hemmingway, Sophocles, Virgil, Stephen King and so many more I can't name them all. I took fiction and non-fiction classes, a class devoted solely to Shakespeare, I took a class on Gothic literature, and popular fiction. I was exposed to Toni Morrison in my African-Literature class and now own about 6 of her books, all of which deal with slavery.

Recently, I finished the Girl with the Dragon Tattoo and The Help. I'm currently working on the Rum Diaries by Hunter S. Thompson.

Some of my all-time favorites are: Francesca Lia Block's Dangerous Angels, Milan Kundera's The Unbearable Lightness of Being, Mayo Angelou's I know why the caged bird sings and many, many, many more!

For those who don't like books, I don't judge you. As long as you don't judge me when I spend 10 hours in one sitting finishing a book I can't put down.

I got so giddy when my 7-year-old niece said she enjoyed reading because "it makes you smart and it's like a movie in your head". She said, "Aunty, I like books because you can picture the characters in your head however you want them to. If you want them in a purple shirt, you put them in a purple shirt. Or if you want a flower on it, you put a flower on it." Areya Lin, I couldn't have said it better.

And so now that I've rambled on about the books that have inspired me and have affected my life in one way or another, I hope all of you take the time today and everyday for that matter to just, read.

If you've completed this lengthy blog, you're doing great.