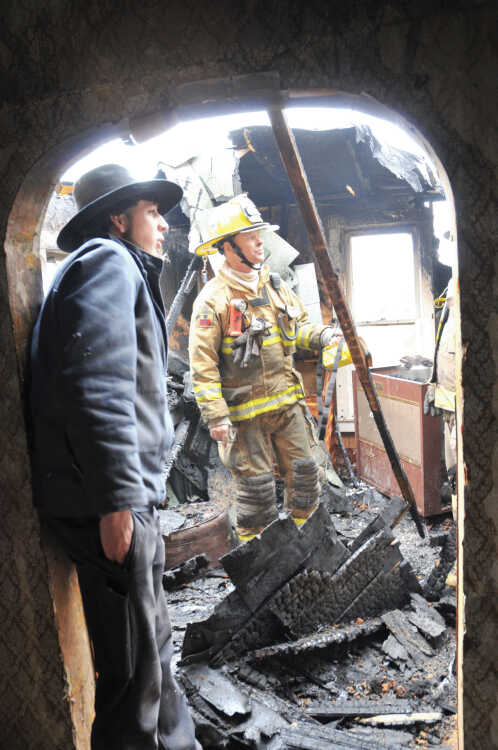 Sam Yoder and Bourbon County District 3 Fire Chief Delwin Mumbower inspect the rubble after Yoder's home near Devon caught fire Tuesday morning. A heating stove, seen behind the two men, is suspected of creating an amount of heat its exhaust pipe could not handle and igniting the blaze, according to Mumbower. -- Rayma Silvers/Tribune Photo

This weeks pic of the week was featured in the Wednesday edition of The Tribune with the article titled "Family escapes house fire unharmed". The photo was taken by Rayma Silvers.

Call me a pyro, weird, whatever but I am a fan of photos that involve fire or fire damage. Don't get me wrong, I do care about the people who have lost items due to the fire, but such an event lends to true emotion from the subjects.

For me the thing that makes the picture a photograph is the use of the doorway. In photographer terms, that is called framing. By having the subjects framed in the doorway, there is no confusion where the focus of the photograph is located.

This photo shows a home owner surveying the damage of his home with the firefighters who extinguished the blaze. As they look on, you can only imagine what is going on in his mind as he looks at the debris which was once his home.

The photo is a little over exposed, or washed out, but otherwise a good photo which tells a story.