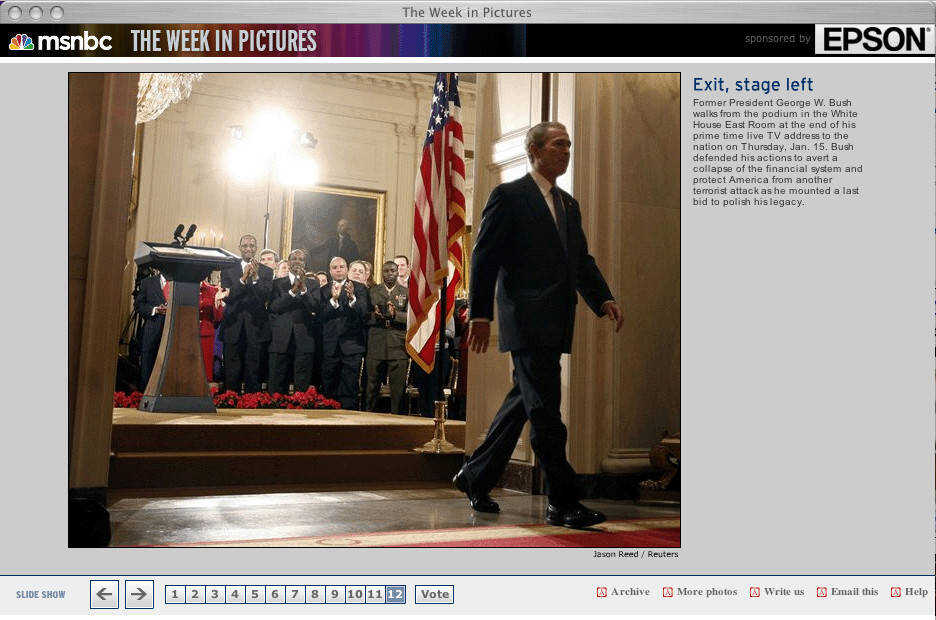 Exit, stage left. Former President George W. Bush walks from the podium in the White House East Room at the end of his prime time live TV address to the nation on Thursday, Jan. 15. Bush defended his actions to avert a collapse of the financial system and protect America from another terrorist attack as he mounted a list bid to polish his legacy. (Jason Reed/Reuters)

I am a subscriber to the MSNBC "The Week in Pictures". A link is sent to my e-mail where I can look at the week's featured photos from around the world. I was looking at the photos this morning when I came across the photo above that struck me as a great photo. To be selected to "The Week in Pictures" it has to be good but there was something special about this particular photo.

Personally I am a big fan of photos that tell a story from a different point of view. This photo, taken by Jason Reed/Reuters, is not your typical "farewell speech" photo that shows a man giving a big wave as he walks off the podium. Former President Bush is walking off the stage for the final time. For as much criticism as he received during his time in the White House, he stood tall, held his head up high.

There seems to be a look of relief on Former President Bush's face, almost a bounce in his step. If I were in his position, I would certainly be relieved as well. There is no doubt in my mind that he did his best. Most people are afraid to speak in public and this man was facing the most important people in the world every day.

Another reason I love the photo so much is because is shows a bit of what Bush saw everyday when making addresses and speeches to his colleagues. The lights, the people, the podium, the atmosphere, the camera, the intimidation.

This photo tell the story of a man stepping down from the role of "Leader of the Free World" for the last time with dignity and the respect of his colleagues.

To view all of this week's featured photos visit www.msnbc.com.