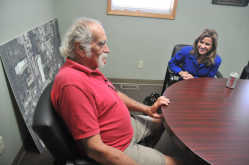 Local resident Leon Sinn sits down to talk with U.S. Rep. Lynn Jenkins, R-Kan., during open office hours hosted by the congresswoman Friday morning at Fort Scott City Hall. Jenkins said the one-on-one meetings are open to constituents who want to discuss a private issue with her or are not comfortable asking her a question during a public forum.

The congresswoman, who has served Kansas' 2nd Congressional District since 2009, hosted open office hours Friday morning at Fort Scott City Hall before traveling to LaCygne for her next stop. Jenkins has offered Congress to Kansas since she took office to keep constituents informed about her work in Congress.

The Herald-Tribune posed some questions to Jenkins during her visit about issues impacting Kansans. The following are those questions and her responses:

Q: What is the most common complaint or concern you have heard from constituents and how are you working to address it?

A: "It's two-fold; the economy and jobs, and the debt and deficit issue. The House has passed a budget bill the last two years that eliminates debt over time." Jenkins said she is focused on getting the "economy moving again" through growing revenue and legislation that creates jobs.

Q: What are your thoughts on the redistricting issue facing the Kansas Legislature?

Q: What are other important issues facing Kansans and your thoughts on those?

A: "We need to get to a balanced budget and rein in some of the out-of-control, wasteful Washington spending."

Q: What are your thoughts on the current federal budget situation?

A: "It's a mess. We're spending more than a trillion dollars more than we're budgeted to take in. You can't operate a government like that. The House budget plan is not flawless, but it's the only plan that's serious. We cannot spend more than we're taking in."

Q: What do you propose as possible solutions to growing the economy and cutting down on debt and overspending?

A: "We need to grow the pie so everyone has an opportunity to succeed. We need common-sense regulation on the tax front. We're talking to Kansans to provide assurance and certainty with the financial situation." Jenkins said overspending and too much debt are top concerns in Congress. The federal government is currently borrowing money to pay all the interest on its debt, which could eventually result in the nation's financial system becoming bankrupt.

Q: What are some of your thoughts on health care reform legislation?

A: Jenkins said the U.S. Supreme Court is currently looking at the constitutionality of the health care bill and the House is "working on appropriate action," depending on the court's decision.

A: Jenkins said her job can be challenging due to the current fiscal crisis and also rewarding when she is able to help constituents.

"We are at a crossroads right now. We could fall over a fiscal cliff at the end of the year ... We've cut, but it's not enough. We have a lot more to do, but I can see some progress."

Jenkins said she is serving her first year on the House Ways and Means Committee, which she said "deals with all things tax and trade."

She also serves on the trade subcommittee.

Kansas' 2nd Congressional District covers most of the eastern part of the state.

Jenkins' open office hours are brief, one-on-one meetings with the congresswoman that are open to any resident of the 2nd District on a first-come, first-served basis. Congressional staff is on hand before and after the private meetings to handle any additional casework.

Throughout this year, Jenkins will continue traveling to communities in eastern Kansas to hold a series of listening sessions and mobile office hours.

Jenkins said she and her staff are spending a week in Kansas listening to constituents, and plan to cover 26 counties this year.