By Jerry Pfeifer/Special to the Herald-Tribune 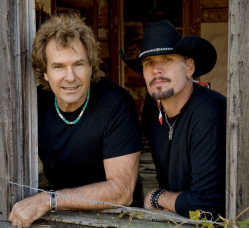 On July 4, the award winning country recording group Blackhawk will land in Rich Hill, Mo., just 20 miles north of Nevada, to perform for thousands of fans at Rich Hill's "Famous for the Fourth" celebration. It's the one time a year when the small town of 1,500 swells to the size of neighboring cities.

But Blackhawk won't actually land in Rich Hill because the small bedroom community doesn't have an airport; instead they will arrive in tour buses loaded with enough electronic equipment to fill several box cars.

Great songs have always been the cornerstone of Blackhawk's success, songs like "Goodbye Says It All" which shot up the charts in 1993 followed by hits like "Every Once in a While," "I Sure Can Smell the Rain" and "That's Just About Right." But in addition to their recording accomplishments, Blackhawk is known for their live performances. There is a sincerity and originality in what they do that rings true with audiences everywhere.

"We love live shows," said lead singer Henry Paul, "because it means there's an audience. It's a chance to communicate," something Paul loves to do.

Paul, who has never had a day job as he put it, discovered early on that music was his calling.

"I remember when my older brother had a band," said Paul. "I was just learning to play guitar and was standing in the back as his band played in a high school cafeteria and I thought, I can do that and even better."

So after high school, while others went on to college or started working careers, Paul packed up his guitar and went to Greenwich Village in New York where he street played to get by and did some 'social research' while learning to play a couple more instruments.

"From the very beginning I made up my mind I was going to be a professional musician," said Paul.

After his brief stay in New York, Paul returned to Florida where he recorded four albums as lead singer for the Outlaws, before hooking up with David Robbins and Van Stephenson to form Blackhawk.

"Some people think performing is all about fame and money, but it's more than that," said Paul, "it's a way to express yourself like a painter does on a canvas. It's a human thing."

When asked what it felt like when he first heard himself on the radio, he couldn't help but think of Blackhawk's first album and the chart-climbing single, "Goodbye Says It All."

"It was about 2 in the morning and I was driving all by myself from Nashville to Tampa and 'Goodbye Says It All' came on the radio," said Paul. "It sounded sensational. I must have been going 75 to 80 mph in my GMC and I was just enjoying the sweet nectar of success." It was one of those moments, according to Paul, that validated all the effort he and the band had put into their work.

Over the next several years, Blackhawk would record a number of hit songs and sell millions of albums, but one thing they always did was tour.

"We play shows year in and year out," said Paul, "I've never not been on the road. It's a place I love to be."

On Monday, July 4, that place will be Rich Hill where Paul and Robbins and the rest of Blackhawk will perform at 8:30 p.m. on the main stage in the West Park in Rich Hill, Mo. The free concert sponsored by the Rich Hill Fourth of July Committee will be followed by an autograph session and fireworks at 10 p.m.