Serving in a time of turmoil: Vietnam veteran James Dulin talks of his experiences

By Neoma Foreman - Special to the Herald-Tribune 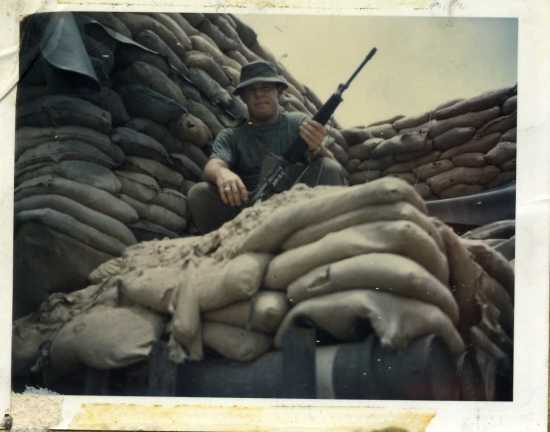 Above, James Dulin at his post, in Vietnam, 1968. At right, Dulin in front of a tent. --submitted photos

James Dulin was born in Alabama, and for the first 23 years of his life, he said he "just fooled around." One day he answered a knock at the door and there was a Marine Recruitment Agent.

"He said my mother told him to come by and talk to me. I decided it was time for me to change my lifestyle--and I enlisted."

However, when he pulled in to Parris Island, S.C., on a big Greyhound bus, his life changed drastically.

"A sergeant jumped in the bus and said 'you've got five seconds to get off this bus and you've already wasted three of them!

"We were taken to a long building where we were assigned a number to stand at on the yellow footprints on blacktop. We had to take everything out of our pockets. They took our wallets and tore them apart looking for stuff we shouldn't have. They kept them until we graduated from boot camp 13 weeks later. It was a bit different than I expected." While at Paris Island, he learned to shoot on the rifle range, march, drill, use hand grenades and different types of weapons.

The next stop was Camp Lejeune, N.C., where he was sent for two weeks for advanced infantry training. He learned combat maneuvers, lots of field tests, and fired a lot of different types of weapons.

Camp Pendleton, Calif., was his next stop where he spent three months in Field Artillery School. After that, it was across the ocean to Da Nang, Vietnam, which was home to one-fifth of all the U.S. servicemen based in Vietnam. This made Da Nang one of the heaviest defended cities in South Vietnam. Dulin was in a heavily fortified city on Jan. 30-31, 1968, during the Tet holiday. Vietcong units surged into action over the length and breadth of South Vietnam. In more than 100 cities and towns, shock attacks by Vietcong commandos were followed by wave after wave of support troops. By the end of the city battles, 37,000 Vietcong troops had been killed, many more wounded or captured and the fighting had created more than a half million civilian refugees. Even though Americans lost 2,500 men, it was a much more serious blow to public support.

Dulin was moved to Dong Ho to a rear base camp which held all the operations. He was assigned to a firing battery which had six big guns in each unit. They were broken up into six units which went to the front for two months and off for four months. They were sent to DMZ to a place called "The Rockpile." During all of this they conducted fire missions. Back at the base they repaired guns and two more batteries were sent to take their place. In the meantime, rounds were fired at them at night for harassment. He said that during a 24-hour period, he might get three hours of sleep.

The weather was hot every day except for six to seven months of monsoon when it rained every day and was some cooler. But there were floods. They had to build trenches around their tents and those would fill up with water and get inside. They had no rain gear as it wouldn't last. They went without shirts and sometimes wore the same pair of pants for six weeks. Their feet were wet all the time.

Even though it was jungle, Dulin was never bitten by a snake -- one of the inherent dangers of the jungle -- as they were always on the lookout for snakes. "But I was bit by a rat. You had to be there to be able to describe it, but there was no sanitation there-no natural waste disposal, water buffalo everywhere. We would go to a city to set up operations and set up base camp and the place would be infested with rats."

Dulin related that one evening they had finished setting out a guard around the perimeter and it was his turn to guard. The officer of the day sent word that he would be out soon to check post. The next thing Dulin knew, he was being struck-hard-across the knees. He had gone to sleep on watch and was caught. The officer threatened him with Leavenworth and court martial, but Dulin promised he would do any thing he wanted him to do. He was made to stand guard for the next month. "I never went to sleep on guard again. I did what ever I had to do to make things work. Even though I didn't smoke, I'd light a cigarette and keep it between my fingers. If it burned my fingers, I knew I'd better move."

After serving 13 months he came home and would go back to serve six months. However his first time on leave made him not want to come back to the United States. He couldn't wear his uniform or people spit on him. When he went to the airport to go back to Vietnam, he had to be guarded. People yelled "Baby Killer." Dulin said that if those people had been there, they would know that the baby tried to kill you. "They planted those babies with grenades and here we were trying to protect them and get treated like that."

"After a certain period of time," Dulin said, "I had no nervous system. I just tried to forget about everything and do what I had to do." However, Dulin said the Marine Corps soldiers looked out for each other. "There was a bond there that only those in battle could understand."

One good thing happened to Dulin on leave; however, he met Connie Lewis at a church Christmas program at Phoenix City, Ala. They started writing to each other.

When Martin Luther King was killed, Dulin was still in Vietnam and there was a struggle with racial problems among the troops. "There wasn't any problems in our unit, our group was close and didn't create problems. If one arose we talked it out. I was raised in the south so they were all the same to me. The Marine Corps tells you at first that all Marines are only one color -- and that is green. It worked."

Dulin admitted that they say you don't have friends in the military, you have acquaintances, one event stands out in his mind and he remembers it often. "One night I was standing guard duty out in the boonies and had a new kid who had only been in the country a week. I took him under my wing to get him broken-in and show him how things were done on guard post -- while one is up, two are down sleeping. That evening, the kid was on watch when the rockets started coming in -- and he just plain disappeared. We never saw him again, no body parts, or weapons, nobody knew anything, he was just gone. That still bothers me, wondering where he went or what happened."

After Vietnam, Dulin was sent back to North Carolina for a month then transferred to Marine Corps Barrack at Hawthorne, Nev., where it was 120 degrees in the daytime and snowed at night. He was there for five months when they started sending troops home from Vietnam. The Marine Corps could only have so many people on record and had to start discharging people. He was discharged with "Inconvenient to the Government" discharge which is the same as "Honorable.

After discharge, Dulin and Connie Lewis began dating and were married on February 19, 1973. Later, they moved to Kansas City for a job, and eventually moved to Schell City after he contracted cancer which is believed to be caused by being sprayed with brush killer in Vietnam. His battle continues.