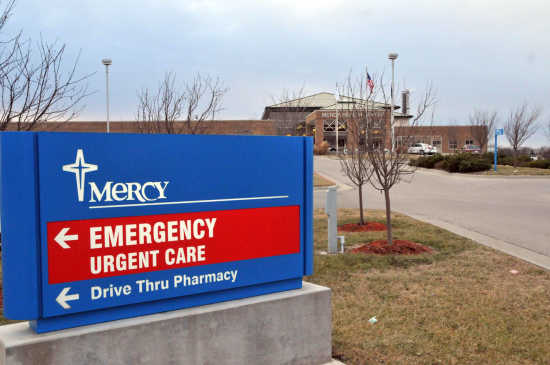 Mercy Health System of Kansas, Inc., announced a major round of layoffs and project cuts Wednesday due to economic difficulties currently faced by the hospital. -- Michael Pommier/Tribune Photo

About 30 Mercy Health Center employees in Fort Scott will soon be without jobs after staff and program cuts announced Wednesday by company officials are enacted.

Mercy Health System of Kansas, Inc., announced cost containment measures that include staff reductions and modifications to services in an effort to conserve resources and continue the provision of quality healthcare to its communities, a MHSK statement said.

Citing under-utilization of services, increased obligations to provide charity care, and rising bad debt in unpaid patient accounts, MHSK President and CEO John Woodrich said the organization, like many others in the area, has been adversely affected by the continued downward spiral of the nation's economy over the past several months.

"We have been good stewards of our resources for many years, so today we remain a financially sound organization," Woodrich said. "However, there is no end in sight to our country's economic crisis, and the impact appears to be widening and escalating. For that reason, we had to take action immediately." 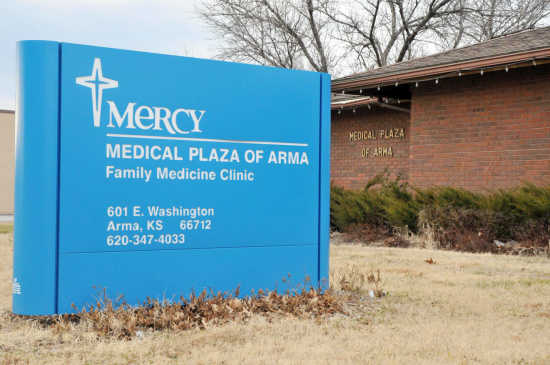 Mercy has announced the pending closing of its rural health clinic in Arma. The clinic's last day of operation will be Feb. 6. Their are currently four full-time staff positions at Mercy Medical Plaza of Arma. The closing will lay off three employees, while one will transfer to a position at Mercy hospital. -- Michael Pommier/Tribune Photo

"We did a comprehensive overview of the entire organization, including Fort Scott and Independence," Woodrich said.

While these numbers represent a small percentage of the 750 staff members employed by both hospitals, Woodrich explained that it is never easy for the company to lose any of its employees.

"For us, losing one employee is big," he said.

One of the changes that Mercy officials announced Wednesday involves the provision of physician services for the emergency rooms at both hospitals. MHSK has contracted with Acute Care, Inc., of Des Moines, Iowa, to provide ER physician staffing at both locations. The part-time coverage started at Mercy Health Center in Fort Scott last week and will begin in Independence on April 7.

Local emergency room physicians already practicing with Mercy will have the opportunity to apply for employment with Acute Care. Emergency rooms will continue to be staffed with a provider 24 hours a day, seven days a week, Woodrich said.

"I have experience working with this company, and they have proven to offer exceptional service," he said. "In the contract with the company, we have established standards for quality, service and patient satisfaction that must be maintained, and compensation is directly linked to these measures of performance."

Other services and facilities

Mercy has announced the pending closing of its rural health clinic in Arma. The clinic's last day of operation will be Feb. 6. Mercy Health Center in Fort Scott will also discontinue its weekend cafeteria service.

All employees affected by Wednesday's layoffs will receive comprehensive severance packages and any requested assistance with job seeking, Woodrich added.

Woodrich also said that Mercy has submitted a new reimbursement proposal to the Bourbon County Commission for continued operation of the county's emergency medical service. Through financial analysis, MHSK has determined that fees and reimbursement are no longer covering the costs associated with operating the ambulance service.

The new proposal will allow Bourbon County commissioners time to consider the issue, and if an agreement is reached for an increase, Mercy will continue to operate the ambulance service and retain an additional 14 employees (not included in the 44 affected by the changes announced Wednesday). If no reimbursement agreement is reached, the proposal calls for Bourbon County to assume operation of the ambulance service on July 6.

According to Woodrich, Mercy is obligated to allow the county sufficient time to replace the ambulance system if commissioners decide against a fee increase.

"According to our contract with the county, we have to give six months notice (on a new proposal)," he said.

Bourbon County Commissioner Bill Brittain said Wednesday that information regarding the emergency service proposal was supplied to him on Tuesday, so he could not release specifics about the fee increase until it was discussed by the commission in their regular meeting Friday.

"They'll (Mercy) either pull out or make their fee higher," said Brittain. "It will be up to the commission to make a decision, and at this point I don't know what that will be."

Finances in the health care industry

MHSK is part of the Sisters of Mercy Health System based in St. Louis, Mo., which also owns and operates multiple hospitals and outreach ministries in Oklahoma, Arkansas, Missouri, Texas, Louisiana and Mississippi. Woodrich said that all hospital units within the Mercy system are experiencing negative economic trends at this time, as are most hospitals in the nation.

A large part of this financial slump, felt within numerous hospitals, can be attributed to diagnosis-related groups -- a flat rate medical care reimbursement program -- and MS-DRGs -- a version of DRGs which took effect as of Oct. 1, 2008, said Woodrich. MS-DRGs include the implementation of Hospital Acquired Conditions. Certain conditions are no longer considered complications if they are not present on admission, which causes a reduction in reimbursement from Medicare for conditions apparently caused by the hospital, according to Woodrich.

"Reallocated payment for some programs (due to MS-DRGs) lowered reimbursements even more. Rural type hospitals such as Fort Scott and Nevada; they took a big hit."

Woodrich said Wednesday, despite the abruptness of Mercy's implemented changes, financial difficulties have not taken the hospital's administration by surprise.

"We've been monitoring things for months," he said. "You start to feel some of the impact and see what other companies are doing and get an idea what is going to happen with the economy. We're just not seeing any change (in the near future)."

Mercy's round of employee cutbacks will be a difficult period for the facility, as it has been for numerous other hospitals in the area, according to Woodrich.

"We're certainly not alone in this struggle, and we've seen even larger scale reductions by hospitals in our area in recent months," he said. "But a layoff is not an easy thing to do. Every co-worker is a valued member and asset to our healthcare ministry. We do want the community to know that we remain committed to providing uncompromised, high-quality healthcare to our citizens, just as we have for 130 years in Southeast Kansas, and we look forward to future opportunities for growth."

Brittain said he does not expect the local effects of America's declining economy to remain solely within Mercy.

"Mercy is just having a financial situation right now ... just like a lot of places. Unfortunately there will probably be more situations popping up like this in the near future."

Woodrich added that Mercy expects to gain significant revenue through its cost-saving measures.

"We are expecting an increase of about $4 million through cost reductions and revenue increases through additional services," he said.

Across the state line, Nevada Regional Medical Center is keeping a close eye on its own financial issues, but CEO Judith Feuquay said no layoffs are planned.

"We are at this time under a review, like the one we did four and a half years ago, to identify possible cost savings. It is not our intention to do any layoffs. We've been very watchful of productivity and try to maintain high levels. We're like any one else in business we have to watch our finances. We're in business to deliver health care and good service in the highest manner and we partner with physicians to do that," Feuquay said.