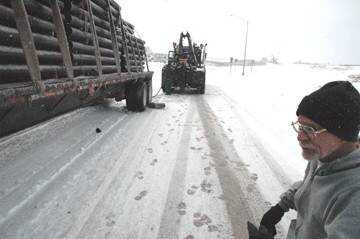 Tribune photo/Michael Glover Tim Bender, Mineola, Texas, looks over his tractor-trailer rig, which froze to the pavement during an overnight stop. He needed some assistance Monday after the rear tires froze to the pavement at an on-ramp for the U.S. Highway 69 and Kansas Highway 31 junction north of Fort Scott. Bender had parked the semi, with a load of sewer pipe, at the on-ramp around 9 p.m. Sunday. On Monday, when he tried to resume his trip to Omaha, Neb., he discovered that the trailer wouldn't budge. Bender said in his 43 years of truck driving, he's never experienced tires frozen to the road -- until Monday.

Bourbon County dodged a major ice storm and many headaches associated with the winter weather that crippled parts of Missouri and Oklahoma over the weekend.

Ice accumulation in the area never reached the forecasted levels, instead dumping upwards of one-half to an inch of sleet that made driving slow but manageable.

Waves of freezing rain, sleet and snow since Friday were blamed for 15 deaths in Oklahoma, six in Missouri, five in Iowa, two in Texas and one each in New York and Maine, according to the Associated Press.

The weather caused no injury accidents on Saturday or Sunday. However, there were three accidents in Bourbon County on Friday morning, one of which sent two Fulton residents to the hospital.

Hyer said the problems on Friday resulted from the fact that the storm started earlier than anticipated, catching drivers off guard. Fort Scott Police helped numerous motors who became stuck in the heavy sleet.

The county issued a statement Friday, telling residents to decrease driving over the weekend. However, the warning was issued when forecasters predicted southeast Kansas would receive heavy ice accumulation on Saturday and Sunday.

Hyer said the facility was not used by any residents, because no power outages were reported, as confirmed by a Westar spokeswoman, who added that one outage call was reported in Crawford County.

About 70,000 Empire District Electric customers were without power Sunday night in Missouri, Oklahoma, Kansas and Arkansas, according to The Joplin Globe.

Most of the Missouri power outages were caused by the weight of freezing rain snapping tree branches and dropping them onto power lines, according to the AP.

Hyer said a homeless man did call her, asking about a place to get out of the bitterly cold weather now hitting the area. She called the Bourbon County American Red Cross Chapter office, and officials put the man in a hotel over the weekend.