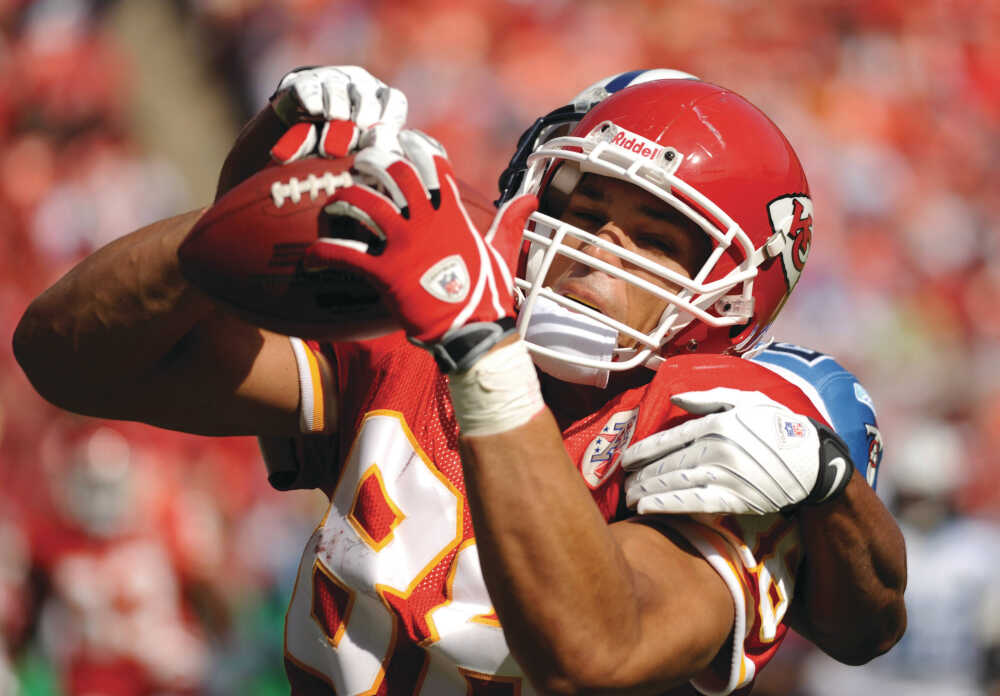 Tony Gonzalez (88) of the Kansas City Chiefs catches a pass in front of a Tennessee Titans defender during action Sunday afternoon at Arrowhead Stadium. Gonzalez caught six passes for 97 yards in a 34-10 loss to the Titans. (Captured Images/Kenny Felt)

Sports Editor's Note: This appeared in the print edition as a commentary, but on the Web site, it seems to best fit in as a blog.

Let me start off by saying I am not a Kansas City Chiefs fan. In fact, Jason Silvers and former employee Michael Glover would tell you I hate them.

I don't hate them; they're just not my favorite team. But it gets their goat when I act like a hater.

I grew up a Houston Oilers fan. My first memories of the NFL basically go back to Earl Campbell's rookie year and it is very odd to read in a media guide about the records he and Warren Moon hold for the Tennessee Titans, which were the Oilers until 1999.

This doesn't mean I don't respect players on other teams. And in the few instances I've been in the Kansas City Chiefs' locker room after a game, you'll notice two people who always step up and face the media after the game, no matter the outcome.

One of them is guard Brian Waters, who is about as well-known as an offensive lineman can get.

The other is Tony Gonzalez, the sure-to-be-a-Hall-of-Fame tight end.

This week, however, had a chance to be different. Earlier in the week, Gonzalez's request to be traded to a contender was not fulfilled as the trading deadline passed. And just about everyone in the Chiefs' organization would have been happy for him had a trade gone through. After 12 seasons in the league and all the records he had set, the feeling was that he deserved to be traded to a contender and get a shot at a championship.

But that championship ring won't go to Gonzalez, at least not this year.

So a few of us wondered, would Gonzalez be in a dour mood, especially if the Chiefs went and lost -- which they did to the Titans, 34-10 -- and decide that, just this once, he didn't want to talk?

To ask that question means you don't understand Tony Gonzalez. And after seeing him go out an hour before the rest of the team, save the special teams, warmed up and practice his routes and cuts the same way he's been doing it for 12 seasons, you start to understand.

Tony Gonzalez can't go out and do less than his best. He understands his position as a professional athlete and a team leader too well to let that happen.

And he understands his position as a professional athlete and a team leader too well not to face the media and give his honest thoughts. Even after a day when the Chiefs went through three quarterbacks and couldn't stop the Titans' running game even if they had Godzilla and King Kong playing linebacker.

"I would never want to go out there and not play at a championship level," he said. "I think we have to play at our best, week in and week out. There's no reason why we can't, as far as I'm concerned.

"We're in a tough situation. It's going to take some character. Guys are going to have to step up. We just have to go out there and get it done. We're professional athletes. Drafted or signed here as a free agent, we all get paid to play this game. We have to go out there and do what we've been doing our while lives and to the best of our abilities week in and week out."

Chiefs fans made their appreciation clear before the game, showering him with their loudest applause when he was introduced. No matter what else may be going on in Kansas City, fans know they can count on Gonzalez to give them his best.

"It was bittersweet," he said of the pre-game ovation as he clearly expected to be with a different team this week. "But I'm going to go out there and play well. You still have to put the effort to try to win. We have to go back to the drawing board and try to figure out how to get points on the board. We're having to push it to get first downs. It's work in progress and we have to keep chopping wood.

And Gonzalez could easily say the Chiefs' woes aren't his fault because he goes out and does his job. But, again, that's not the professional philosophy to which he subscribes.

"I think we all have to take responsibility," Gonzalez said. "I don't think you can point to one particular phase and say that's the whole problem. That can be said about everybody -- offensive players, defensive players, special teams. We've all contributed to not getting things done.

"We can't afford to make mistakes. There's no doubt about it: We can play better."

And as team spokesman, he was asked to comment on the Larry Johnson situation. The once-All-Pro running back was placed on the inactive list for this game after he was allegedly involved in an altercation with a woman in a bar, his second incident since February. There's speculation that Johnson will be suspended by NFL Commissioner Roger Goodell under the league's personal conduct policy.

It seems ironic that Gonzalez was asked to speak about the status of a player who is probably considered his total opposite in terms of conduct.

"I think that's what Roger Goodell wants and what organizations in the entire league want if for their young guys to take heed to the rules and stay out of trouble," Gonzalez said. "And I don't know what happened with Larry so, obviously, I can't speak on that. I don't even know who handed down the punishment."

Goodell would love a league full of Tony Gonzalezes -- men who are team-first leaders who embrace their roles. Terrell Owens seems to be trying to become one of those men. Sometimes, it seems genuine. Sometimes, he slips back a little and we hear another story of Owens' displeasure.

There's probably at least one man like Gonzalez on every team in the NFL. We don't hear enough about those other men, although Gonzalez's reputation seems to be well-known, perhaps also because of his greatness on the field.

Does every team have such a player, though? Is there a man like Gonzalez playing for the Cincinnati Bengals or the Oakland Raiders? Who serves this role in Tennessee?

It's unfortunate Gonzalez couldn't be rewarded for all those seasons of work by being sent to a contender. But if he had been traded after all, it would have created a hole that couldn't be filled.