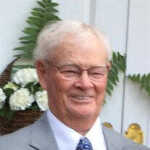 Lowe graduated from Fulton High School, Fulton, Kan., and the University of Kansas. While stationed in Germany during his military service with the U.S. Army, Lowe began dating Louise Penfold, who was studying aboard. Their mothers had been college roommates at KU. During their 59-year marriage, Lowe and Louise were blessed with five children, 10 grandchildren, and two great-grandchildren.

Lowe retired from the Field Local School district in Brimfield, Ohio, after a 27-year career as teacher and coach. After retirement, he enjoyed being with his family, playing golf, watching KU basketball, and spending the winter months in Lake Placid, Fla., with Louise.

Lowe was predeceased by his parents, brother Lynn Frisbie, and brother-in-law Jim Robbins. He is survived by his children, grandchildren and great-grandchildren, Linda (Tom) Kern-parents of Adam, Chrissy, Heather and Mere, Laura (Brad) Horovitz-parents of Zachary (Holly) and Nate, John Arthur Lawrence, Lisa (Todd) Jones-parents of Tyler (Alyssa) and Kasey, and Leslie (James) Madden-parents of Sam and Jessica. Great-grandchildren are Emerson and Hudson (children of Zachary and Holly). Also, Lowe is survived by his sister Eloise Frisbie Robbins, sister-in-law Faye Frisbie, and brother Steve (Carolyn) Frisbie, and many nieces and nephews..