Education is her choice of weapon 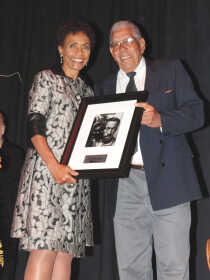 This year’s Gordon Parks Choice of Weapons Award recipient is credited for being an example of using education as her choice of weapon.

Kevin Willmott, the 2016 Choice of Weapons Award recipient, introduced Gray-Little and led a conversation with her.

A native of eastern North Carolina, Gray-Little talked about her journey to Kansas, becoming a college chancellor and changes in education.

“I wasn’t planning to come to Kansas until I was,” she said.

She admitted she didn’t know a lot about Kansas before she became KU’s chancellor in 2009, but she received a “wonderful” welcome.

After receiving her PhD at St. Luke’s University, she interviewed and was offered a job at Kansas, but did not take it. Instead, she went to the University of North Carolina where she stayed for more than 30 years.

“I had forgotten all about that until I came back here to be chancellor and thought, ‘Well, I guess I was suppose to be here.’ It took a little while,” she said.

Gray-Little talked about her journey to become a chancellor.

“It’s not something I thought about as a child, I’ll tell you that,” Gray-Little said.

Growing up, the only people she knew who had attended college were her teachers and “hopefully” the doctor. She said she did not become “familiar” with advanced education until she was in college.

“I thought, ‘well, there’s more studying to do, I want to do it,’” Gray-Little said.

She realized she wanted to become a faculty member during graduate school. Even after she became involved in university administration, she continued to think she would get back in the classroom. She finally realized she had been in administration for so long that it would be difficult for to go back to a classroom.

“But this is not something I planned on doing. It’s something that happened as I was offered opportunities along the way,” Gray-Little said.

Gray-Little described the community where she grew up as “post-Civil War Reconstruction/pre-Civil Rights.” She said the town was “generally poor – we were very, very low income” – and the town was “very segregated.” She said like everyone, she was “very aware of racial issues and differences and you lived your life.”

Willmott asked who gave her a “thirst for education.”

Gray-Little said she is one of eight children and at least six of them have multiple degrees. She said their mother and their teachers at a small, segregated Catholic school influenced them.

“We lived in a community that consisted largely of our school, our church and the surrounding neighborhood, and the push was from my mother, the push was from the teachers, and support from my father, as well,” Gray-Little said.

She said her mother talked about education and was a “great” reader.

Gray-Little also was good friends with an English teacher who lived in the neighborhood, but had never been Gray-Little’s teacher. She said they often read and talked about English together.

When asked about her accomplishments at KU, Gray-Little spoke about research facilities, which had not been upgraded for 30 or 40 years, and the core curriculum, which had not changed for a quarter of a century.

She said in order to determine what the university was doing well or needed to improve, she visited many communities throughout the state.

She said the biggest challenge in education is getting quality and affordable education to a large portion of the population.