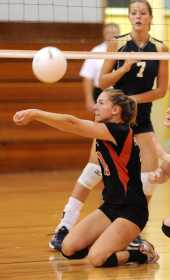 Fort Scott senior setter Libby Halsey keeps the ball in play during a match against Chanute at the FSHS gymnasium Tuesday evening. Halsey recorded 24 assists on the night as the Tigers swept Chanute and Pittsburg Colgan in a non-league triangular. (Captured Images/Kenny Felt)

"Chanute's always tough," Fort Scott head coach Carol Bingesser said. "They didn't lose a whole lot. The big thing with Chanute is they're always at the top. So to beat someone who is always consistently at the top is a feather in our cap.".

Chanute (1-1) jumped out to a 7-2 lead on the Tigers (3-2) early in the first game of the opening match. It actually took a bit of time for either team to get offense going as the points were scored mostly on errors.

Senior Sammi Therwhanger got the Tiger offense going by tipping a ball over for a kill as Fort Scott eventually tied the game at 9-9. She scored a few more points that way before the Blue Comets finally adjusted and went back in front 18-13.

But then Mallory Shelton produced a big block and Megan McDermed snuck a kill down the sideline as the Tigers began to rally.

Another Therwhanger kill off a back set by Libby Halsey gave Fort Scott a 22-21 lead and the Tigers didn't look back.

Neither side had a very big lead in the second game. When Therwhanger had a kill to make it 18-14 in favor of the Tigers, that turned out to be the biggest lead either side would have.

The Tigers trailed 23-22 but Shelton and Kori Allen combined for a block to tie the score and another Shelton block gave them the lead.

Chanute tied it at 24-24 on senior Aly Aylward's kill. But the Blue Comets gave the Tigers the lead when their next serve went long. Then Kameron Braman tried to land a dink inbounds but couldn't, giving Fort Scott the 2-0 sweep.

The Tigers led 9-5 in game one only to see Colgan rally as Ashley Werner served three aces during a run that would see the Panthers go up 16-12.

Marliss Allen's ace serve tied the score at 16-16. Then Therwhanger picked up a couple of kills to make it 18-16.

Colgan tied it before the Tigers scored six straight to make it 24-18. A bad serve gave the ball back to the Panthers but an error gave Fort Scott the final point.

The Tigers jumped out to a 7-3 lead in the second game but the Panthers fought back to score five in a row.

"Their big middle hitter (Caroline Deats) is tough," Bingesser said. "But the thing with Colgan was they were harder to read than Chanute was. We couldn't tell if they were full swinging or tipping on us. And then when they started serving those little dinker serves over the net, we didn't adjust well to that."

Shelton, a sophomore, had three blocks in the Colgan match and tied Therwhanger for the team high with eight kills.

"I thought Mallory had an excellent game," Bingesser said. "She came along and hit well. She blocked their big middle hitter several times and when she got blocked, she started tipping. She wouldn't swing again."

Halsey, a senior playing her first varsity season, dished out 15 assists. She seems to be very conformable with back set, putting it up for Therwhanger several times that way.

"(Halsey) does everything I ask her to do and more," Bingesser said. "So I'm real proud of her. I stuck her in a position where she's got some big shoes to fill. For her to step up and do what she's doing without seeing the varsity floor before like she has, that's great."

The Tigers will be back in action Tuesday night with a non-league triangular at Iola. Prairie View will also be there. Play is scheduled to begin at 4 p.m.