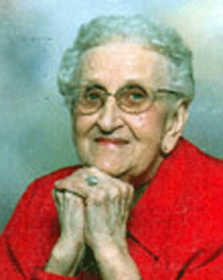 She was born January 6, 1920 in Liberal, Mo., the daughter of Paul C. Fast and Alta Jane Gilmartin Fast.

She married Harold H. Elbrader on Jan. 19, 1943 at Wichita, Kan. He preceded her in death on Aug. 22, 1975. Martha was a member of the VFW Auxiliary where she quilted on Mondays. She also loved ceramics, textile painting and dancing.

In addition to her husband, she was preceded in death by two sisters, Joan Brenner and Ruby Riley.

The family will receive friends from 12 Noon until service time at the funeral home.

Memorials are suggested to either the VFW Auxiliary or the Community Christian Church and may be sent to Cheney Witt Chapel, P.O. Box 347, Fort Scott, Kan. 66701.