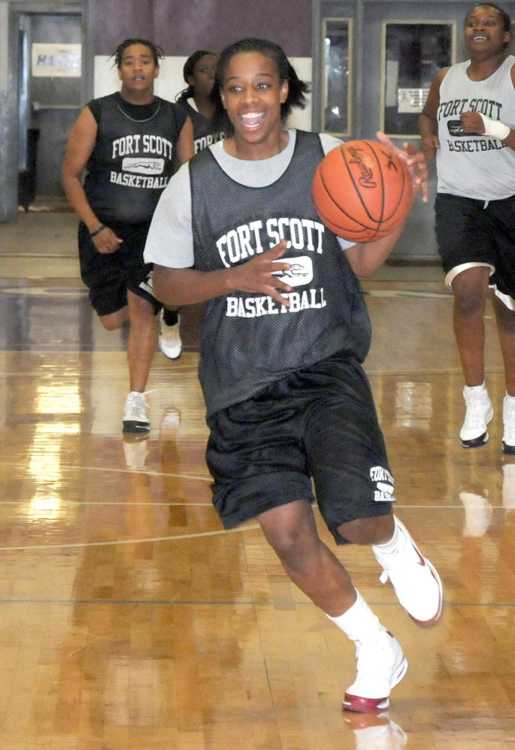 There are only two returning sophomores for Fort Scott Community College's women this season. Yet, second-year head coach Stasha Richards has reason to feel confident that her team, 13-15 last season, can enjoy a winning season.

"The pre-season went well," Richards said in her office Friday morning. "I think the team has bonded. We have a completely different team. We have a lot of new kids. When you have so many freshmen, there's a learning process for them and for us. We have to take it one day at a time but we also have to push 'em to get ready for the Jayhawk (Conference)."

A lot of that optimism is based on the fact that that one of those sophomores is Leondra Doomes-Stephens (5' 10", Soph., Charlotte, N.C.), who was the fifth-leading scorer in the Jayhawk Conference last year at 16.9 points per game. She is one of the country's top junior college prospects and has many Division I programs knocking on her door.

Another reason will be a deeper bench. There were times during conference play when the Greyhounds had only seven players dressed for a game and at least one where there were only six. Sophomore Fatima Lawrence (5' 8", Brooklyn, N.Y.) will most likely come off the bench and will help provide experience and depth that Fort Scott didn't have last season.

There is one more sophomore, Uniontown graduate Kyle Shepard (5' 5"), who played at Hutchinson last season and is one of two players up for the starting spot at point guards.

Doomes-Stephens also shot 42 percent from the field and 33 percent from three-point range. She averaged 5.9 rebounds, 3.4 assists and 3.0 steals per game. She's got the versatility to play point guard, shooting guard or small forward. It's most likely she will play the two guard or small forward so that she came move without the ball and get herself into the best shooting position.

"She's worked over the summer," Richards said. "She knows what the Jayhawk Conference has. Hopefully, she can help with game preparation for our freshmen and let them know how tough it's going to be. But she's just a phenomenal player and we're just lucky to have her."

Shepard and Shadara Hampton (5' 6", Fr., Houston, Texas) are the point guards, an area where Richards feel there is significant improvement. Shepard and Hampton have different strengths and how much each plays in a given game may depend on the pace and what the defenses are throwing out.

"This year, we have point guards who are little bit more disciplined and who are better at running the offense," Richards said. "Last year, we had a scoring point guard, which hurt a little bit.

"I think it's good for both point guards to have the competition. It's open right now. I may not know who's going to start until five minutes before the first game. Kylie is smart and a great three-point shooter. She has a chance to make an impact and be a very valuable player for us. We like what she's done in pre-season for us. She's going to play a lot of minutes.

"Shadara is a completely different player. She is more of an explosive player. She can penetrate and get in the paint and make the passes. She has as good as of a shot when she's on but I think Kylie's more consistent at this point. Shadara is a good defender and can shoot the three. They're both great but they're completely different. It may depend on game-to-game situations, who we're playing and what we need to go."

Every player on the front line will be a freshman as Ashley Jappa, the third-leading rebounder in the conference last season, transferred to Oklahoma State after her freshman year.

"The post is not where you want a lot of youth," Richards said. "But Jappa leaving left us a hole we need to fill and we have an array of posts who are going to try to play that spot."

"Joy has a nice touch," Richards said. "She's a great kid, hard worker. We like what she's doing for us. We don't know what role Brittney is going to play but she's got the ability to really help us. She has to step up and play the college game.

"Our inside game is going to struggle for a bit until we really find our set rotation and find what we're really looking for. We have a lot of good, young talent. This year, we'll be a little bit deeper. We struggled quite a bit last year with depth."

Richards feels the 'Hounds will be quick and athletic and expects her team to be able to run the court.

The Greyhounds have put together a stronger pre-conference schedule, going to weekend events at State Fair, Mo., Pratt, Kan., and Houston. In Houston, they'll face San Jacinto and Blinn, which have been two of the tougher programs in the nation.

"Last year, we kind of just wanted to get our confidence up and this year, we're going for it," Richards said. "We've beefed up our scheduled and it's going to be a learning experience. But it's going to prepare us for conference and that's what we're most concerned with, how we do in conference."

The Jayhawk Conference is one of the top conferences in the nation. Cowley and Coffeyville, which have made names for themselves nationally in Division I, and Johnson County, which has become an annual contender yearly in Division II, will be among the teams the Greyhounds -- who were picked to finish fifth in the Eastern Division in the pre-season coaches' poll -- are trying to keep pace with.

"Cowley is going to be amazing this year," Richards said. "They've got a lot of weapons. I think it's Cowley, Coffeyville, Independence and Labette, then us (in the pre-season poll). And we like where we're picked. You don't want to be picked last but you don't necessarily want to be picked first, either.

"I think (fifth is) a good place for us. We control our own destiny whether we move up or down. It gives the kids a good gauge on how to get to the top. The teams ahead of us are tough teams. Labette and Independence lost a lot, Coffeyville's going to be good and Cowley's going to be great."

Richards feels that the Greyhounds will be able to take the court on any night, especially during conference play, knowing they have a chance to win. Due somewhat to the unstable roster last year, there were nights when Richards was uncertain because she couldn't know who was going to be available.