Local church to be preserved, added to National Historic Register 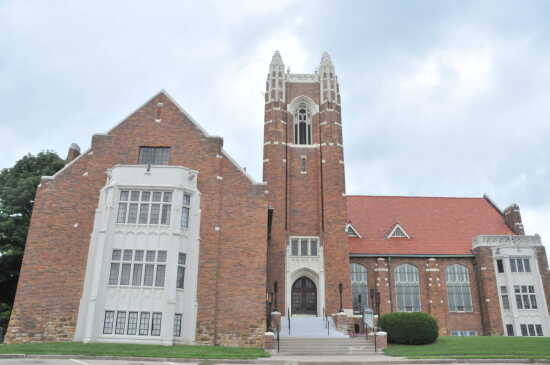 Rayma Silvers/Tribune Photo Left: The First Presbyterian Church, 3rd and Crawford Streets, in a current photo. The church was added to the National Register of Historic Places, a list of historically significant properties and will be preserved.

A local congregation's desire to preserve their church building for generations to come, inspired it to have the building placed on the National Register.

According to a press release from First Presbyterian Church, 3rd and Crawford streets, the church was recently notified by Jennie Chinn and Patrick Zollner, both of the Kansas State Historical Society, that the local church building was added to the National Register of Historic Places on July 2. The National Register is the county's official list of historically significant properties.

According to church member Connie Banwart, the church's congregation has taken on the responsibility for the preservation of the historical church building. Deciding the expense of the building's upkeep could become too costly for the congregation, Banwart said they began looking at opportunities to apply for state grants and tax credits. This led them on the journey to request the church be added to the National Register.

According to Banwart, the members of the local congregation are excited about the church's listing.

"I think we were all really pleased," Banwart said. "It gives us kind of a spring board for what we were already doing -- protecting the building."

According to a letter to the church from Chinn and Zollner, buildings who are listed on the National Register not only enjoy the prestige of being added to the list, but there are other benefits as well. Buildings which are on the National Register may be eligible for tax credits and for participation in the Heritage Trust Fund Grant program, which finances preservation and restoration activities on historic properties. Qualifying expenses include professional fees and construction costs. Individual grant awards may not exceed $90,000 and must be matched by the grant recipient, according to the Kansas State Historical Society, www.kshs.org. In addition, the Kansas State Historical Society provides free technical advice to the owners of historic properties.

According to the church's press release, the present building was built in the 1920s. According to Banwart, one of the reasons the church building was chosen for addition to the National Register was its historical architecture. The building was designed by prominent regional architect Ernest O. Bromstrom of Kansas City, Mo. According to the Kansas City Public Library, www.kclibrary.org, Bromstrom designed more that 52 church plans before 1920 and continued designing them throughout his entire career. His design for the Presbyterian Church building included red-orange tapestry brick and rough-cut limestone. In addition, the church has a central bell tower and red-clay tile roof which can be seen through the treetops from North US Highway 69.

This building is one of several locations the local congregation has occupied since it was chartered with only three members in November of 1859. According to the press release, in the beginning, the congregation met in someone's house. Later, church services were conducted in the military hospital building, which is now the Fort Scott National Historic Site. In 1864, a church building was built on a piece of property located at the corner of Third and Main streets. In 1888, the congregation moved to a building on Crawford Street. Finally, in the 1920s the current building was constructed, the press release said.