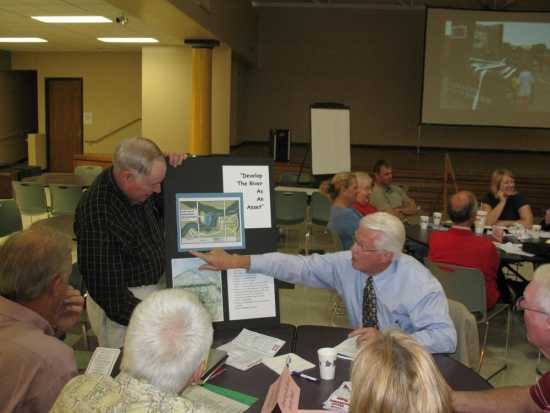 Michael Glover/Herald-Tribune Participants in a forum look at plans and ideas for developing the Marmaton River as an asset, one of five aspects of a community revitalization effort under way in Fort Scott.

Fort Scott, Kan. -- Members of five visiting action teams spawned from a community-wide revitalization project two years ago provided reports on Thursday about how each group is progressing.

Forty-one residents attended the two-hour meeting inside the Fort Scott Middle School to hear the update, as well as to pitch in ideas that could further the goals. Attendees got a chance to sit down and listen and ask questions to each of the five action team members.

The forum was the second of its kind. Last August, the event gave residents the same kind of update on the action teams.

In 2005, Terry Woodbury, president of Kansas Communities, an organization aimed at re-invigorating smaller towns across the state, led an initiative to revitalize Fort Scott. As a result, five action teams were formed -- each charged with developing a particular goal.

The following is a brief update on each of the five goals since they were devised in February 2006:

Jamie Armstrong, a member of the team, said they've tapped economic development ideas from surrounding cities. They visited three towns -- Gardner, Chanute and Parsons -- to develop models that can be applied toward Fort Scott for improving economic development.

For instance, Parsons had success rebuilding its downtown following a tornado that hit several years ago, Armstrong said. The team asked city leaders how they secured funding for the rebuilding effort.

"We want to build up our downtown so it's more inviting and productive," she said.

Two of the goals have been accomplished, Armstrong said. Two consultants hired by the city earlier this year are nearing completion of revising the document. Commissioners have budgeted for the addition of a community development officer and a full-time codes assistant.

This goal was newly formed and took the place of the original action team, Heritage Park, which has successfully met all of its sub-goals.

Paul Martin, member of the Youth Activities team, said members are "doing a lot brainstorming," trying to come up with answers to important questions. They're trying to find an answer to the common statement made by people: "There's nothing to do in Fort Scott."

A way of answering that, and other questions, is by a survey that the group distributed to middle school and high school students. The survey asked them what fun activities or events they would like to see in their community, Martin said.

The group, in partnership with The Fort Scott Tribune, sponsored a back-to-school block party. The event created a fun activity for kids and their parents while informing them of what the action team is trying to accomplish.

This group developed an initiative to bring a $6.5 million combination indoor/outdoor aquatic center to Fort Scott. They had it placed on a special election ballot in June, where voters would decide on whether to pass a 1-cent sales tax to fund not only the pool but also $1.5 million for economic development. Voters rejected the measure.

"We are now in the process of revising the project," team co-convenor Kale Nelson said. Now, they are trying to get a survey to find out what citizens want in a new aquatic center. City commissioners recently rejected spending $2,500 for the survey.

"We just want everybody to know that this project has not ended," Nelson said. "Many people come up to me...and said they just didn't believe that a $6.5 million dollar pool was something that needed to be proposed. It wasn't the pool they voted down. It was the entire project."

Kevin Allen, a member of this group, said one of its goals was to clean up neglected properties and areas along east Wall Street. They've had some success by cleaning up debris and trash-strewn structures surrounding the old grain elevators on Wall Street.

The group has also conducted neighborhood barbecues to gauge the feelings of people living in that area. One problem they've experienced is finding property owners of the run-down structures. Many of the owners live out of town and even out of state. It's hard to find them, Allen said.

A plan devised through the group's effort is a low-interest loan program offered by UMB bank and the city of Fort Scott. It allows low-income to moderate-income homeowners who qualify to borrow funds at a 4 percent APR rate to improve the condition of their home, ranging from a new roof or central air.

Develop the Marmaton River as an asset.

Jerry Witt, a co-convenor of the team, said they've made "giant strides without you being able to see anything for it."

The goal is to transform the Marmaton River into a nature lover's paradise that includes a riverwalk, paddleboats, a wildlife viewing area and hiking/biking trails.

He said there has been much "preparatory work" involved in the project that will hopefully someday lead to success. The team proposed creating a riverfront authority, a public body whose goal would be moving the project forward by searching for grants and public monies. Also, a member of the committee has been assigned to find grants to fund the project. No tax money will be used to fund the project.

In February, the Kansas Legislature approved the creation of the Fort Scott/Bourbon County Riverfront Authority.

Graduate students from the University of Kansas conducted a semester-long study on the project. The students gave the group a comprehensive report on their findings. The report is expected to be "very valuable" to the authority as the project progresses, Witt said.

The group has acquired about 90 percent of the land needed for the project, he said. "This is a big piece of the puzzle," he said. "Once we get this done, we can move ahead."

Woodbury, when addressing the audience Thursday, gave some inspirational advice. He said, "Don't stop, always stay positive, stay connected and anything is possible."