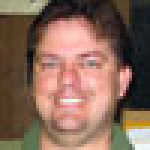 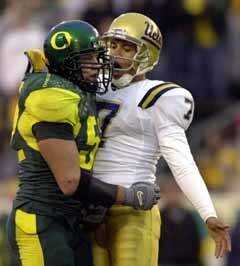 The Chiefs' apparent scapegoat for their poor performance at Houston last Sunday was their rookie kicker, Justin Medlock (7), seen here for UCLA in a game against Oregon last season.

So I watched the Chiefs loss Sunday. Some people in our news room think I watched with glee since I'm a Texans fan. But truthfully, I'm indifferent to the plight of the Chiefs.

However, I am amused by the first move after the loss to the Texans: Cut the kicker.

Byron Leftwich is out there and would certainly upgrade the quarterbacking situation. And maybe it will take a game or two more for Larry Johnson to get on track. But somehow, it's been determined that missing a 30-yard field goal in the first quarter is the culprit.

Granted, no NFL kicker, even a rookie, should miss a 30-yard field goal. But this is a rookie kicker on his first kick that counts in the first game of the season. I don't know but it seems just a bit knee-jerk to me.

And if the Chiefs were going to go with a rookie kicker for whatever reason, the scouting department clearly didn't do it's job. Green Bay's kicker, Mason Crosby, who has a cannon for a leg and set all sorts of records at the University of Colorado, clearly established himself as someone who can handle pressure.

Justin Medlock was only known as an outstanding kicker by Carl Peterson and the scouting department. I can not understand why the Chiefs thought this kid could do the job. And to be so overconfident in his abilities as to not bring in a second kicker to training champ to see how he could perform with some kind of pressure on him seems to me to be quite arrogant.

The Chiefs problems seem to me to be the following:

* - Carl Peterson knows he won't be fired. He wants a winning team but operates without the pressure of being accountable if he fails.

* - Herman Edwards has turned out to be an overrated coach.

* - Once you get past the first string, at any position, is there a player you think can hold things together until an injured player returns? As I look at the roster, my response is "no."

I thought at the beginning of the pre-season that the Chiefs were going to be a 7-9 team. Now, I'm rethinking that. I seriously see 5-11 as a stretch.

But at least the first step toward fixing all those problems has been taken. They cut the kicker.